Technology Resources in one place! What began as an email to staff at my school has become something that I look forward to each week.  I love to investigate new resources for those that teach and for those not necessarily in a classroom.  I hope that you can find things here that you can use!

At one point in my career, I was a math teacher!  I spent some years in the regular ed math class and I spent some years in the REP math class.  I really enjoyed my time teaching math and all of the things that I was able to try and accomplish there.  One of my most amazing years as a math teacher came when I was Team Teaching with Mollie P.  She has since retired, but I remember our year together quite well.  It was by far the best year that I ever had with a co-teacher in my classroom.  One of things that made it work so well for us was our use of STATIONS!  Three or four days a week, our students were in stations.  And it was awesome!  And the results were incredible.  Our results were so good that during post-planning I was called to the AP’s office and told, “We want you to do this in REP Math next year!”  Today, I want to tell you a little bit about our format and hopefully, if nothing else, you’ll consider running stations in your classroom every now and then.

Textbook - Before I talk about the stations, I want to tell you the first thing that we did in our classroom…we threw out the textbook!  We kept it as a guide, but the students never saw it except for rare occasions where we tossed a couple out on station.  So, without a textbook, what did we do?  We wrote our own!!  We ran a lot of copies that year, but I wouldn’t change our results for anything!  Every class (Advanced Math and Team Taught Math) that I taught got a “handout” as they entered the each day.  If it was a “lecture” day, the notes page consisted of guided notes on the front that we would complete in class together and classwork/homework problems on the back.  That was it!!  One sheet of paper for the day.  Each page was numbered and it went in a notebook.  We would lecture to the whole class one or two days per week.

Stations – I will be honest!  We didn’t walk in one day and say, “Let’s do stations.” And it was sunshine and roses…no!  It took some trial and error.  Ultimately, we found a method of using stations that worked and we used it with great success.  So, after this long introduction, let’s talk about what we did.

# of stations – We generally used either 6 or 7 stations.  Mainly for two reasons – number of students per group and these numbers worked great with the length of our classes.

# of groups – Here was the KEY that we discovered while using stations…you need ONE LESS group than you have stations!  You will always have an open station.  You’ll see why this is important in a moment.

Station 1 - Teacher led – This was my station and it was located at the SmartBoard.

Station 2 – Practice A – This station immediately follows the teacher and it’s practice for the skills that the teacher just went over.

Station 3 – Check #1 – For us, this was Mollie’s station.  She spent time checking with the students to make sure that they understood what I had talked about.  Going over the problems from Station 2 or last night’s homework if they haven’t seen me yet.

Station 4 – Practice B – This station was always a practice of basic facts.  Multiplication War with a decks of cards.  Flash cards.  No grade.  Just practice basic facts.

Station 5 – Computers – This was before we were 1-to-1 and we had five desktops in the classroom.  Students would spend time on some computer program – Successmaker, iReady, Go! Math, etc.  No!  They won’t complete a full session, but they can get some accomplished.

Station 6 – Practice C – This station was a review of things that we’ve been doing in class.  Some practice problems based on topics that we have been discussing, but did not discuss at teacher stations today.

Station 7 – Practice D – This station was made up of most test taking strategies.  We gathered as many practice problems that were similar to what student would see on standardized tests.  And we worked on them!!

EMPTY STATION – Depending n the number of students in the class and the topics, we always keep one station empty.  In my opinion, this is what made the stations work so well!!  As the empty “station” rotated around the room, it would eventually hit my station which would allow me to move around the room and check in on everyone as they were at their stations.  In the TT class, that empty station also hit Mollie’s station and she was able to float the room checking on students.

Here’s a look at how I set up Six stations: 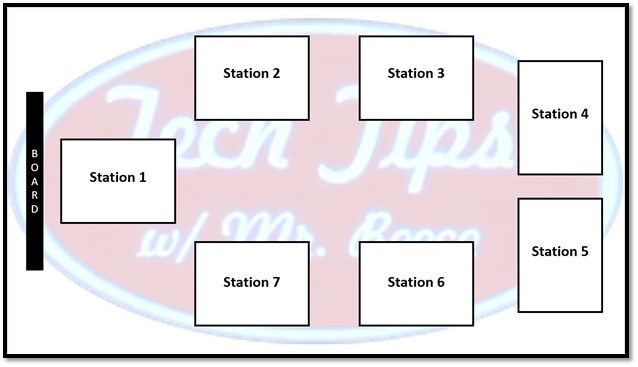 Here’s an example of one of my stations.  This was a practice station for order of operations.  Note:  If they don’t finish all of the problems in the allotted time…Don’t sweat it!  Adjust next time…they might need less problems OR they might need to be with a different group OR they might need to come see you during ELT or before/after school for help.  Remember, this group of problems would be worked on/completed in 6, 7, or 8 minutes – depending on how many station I had that day. Time – We allowed 3-4 minutes from the bell for students to come in, get seated, work on the warm-up and for us to take attendance.  Students would pick up the daily sheet for the day as they entered the classroom.

For six stations, we ran each station for 8 minutes.  Once we started, I started an 8 minute timer.  When it went off, the students moved.  I gave them 10-15 seconds or so to move, and started the timer again.  This transition took practice and at the beginning, we practiced moving!

For seven stations, we ran each station for 7 minutes.

Grading – I used an Answer Sheet on Station Days!  It makes life so much easier!! Below is an example of one that I used.  By using this type of answer key, it allowed me to grade these very quickly!  I would have students attach any scratch paper to the back and I could look at that if needed.

A couple of notes about the answer documents:

1)  I used a separate Warm-Up sheet for the week, but you could add a space for warm-ups at the top of this page, too.

2)  Keep in mind that you want to see what your students know.  Don’t put so many “answer blanks” on here that you are spending hours every night grading these! I have also done stations in the Social Studies and Reading classrooms.  They worked well, but I feel that what Mollie and I did with our Math classes was far above where my previous attempts had been.

I’m itching to do stations again and will be doing so in the very near future!

If you decide to try stations…practice the moving from one station to the next a couple of times before you begin.  Set a timer for 1 minute.  Rotate. Repeat.  Get them in the practice with the expectation – Buzzer sounds, you move, you start working.  No exceptions.